I am never aware of the amount of hours I dedicate to a director I am in love with, although the actual number would probably scare me, leading me to think about the time spent in front of a screen. Like in any love relationship, the first days are frenetic. Everything seems to be happening right outside of one’s reach, the mind wrapped into dreams and thoughts that are now slowly withdrawing to leave enough room for new dreams and thoughts. Time makes no sense and it takes days, weeks even for the fog that the mind is happily struggling through to clear away.

Recently I’ve enjoyed a similar situation when I discovered what I had been missing in Paul W.S. Anderson for many years. I was already familiar with some of his work and I knew most of my favourite critics agree on the qualities of his film-making skills, but I couldn’t see these qualities. I couldn’t see that the man behind the films has always been a passionate and dedicated author since his beginnings, firm in his belief of what matters in the cinema he wants to do1. Once again, I was reading films instead of watching them.

Reading a film, in my case, means focusing on certain aspects. Due to the lack of a proper education in film studies, books help me explore cinema and film criticism: biographies give me background context, while monographs provide me with some necessary tools to dig deeper. These books usually come recommended by reliable sources (i.e., the afore-mentioned film critics), otherwise I just move by instinct and read about a director or a genre at any given moment. Such an approach has been proving useful since I started showing an interest in cinema beyond entertainment, but it’s a narrow vision. By limiting my analysis to the connection between the images on the screen and the words on paper I was missing a crucial facet: the experience of watching.

Anderson’s career makes for a great candidate to understand the experience of watching because within the confines of specific genres (science fiction, horror, and action), the English director has been consistently pushing for an aesthetic of the senses. Anderson is primarily a visual artist, all of his films living in their own world in terms of how they are perceived by the viewer’s eyes. This is true in general in Anderson’s filmography, but it is noticeable on a smaller scale too, such as in the Resident Evil series where each chapter has its decisively distinct look.

The architecture of indoor and outdoor spaces is key to the eloquence of Anderson’s style. Fascinated by mazes, he traps the characters in perpetual displacement. Extra-dimensional forests, roads to nowhere, shape-shifting rooms, claustrophobic tunnels, and impending natural disasters constraint people and force the action to develop itself in places where escape, if any, comes at a high cost. Never in Anderson the background functions perfunctorily as a container for the action in the foreground. Whether controlled by an artificial intelligence or a corporation, propelled by nature’s uncompromising power or just waiting to be set in motion by human intervention, stages are as much of a tangible presence as anything and anyone inhabiting them. 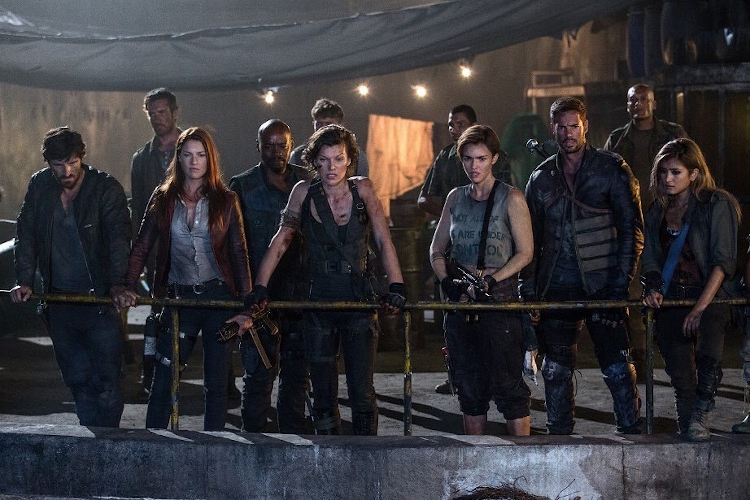 The move to digital from Resident Evil: Afterlife onwards has not only increased the opportunities for Anderson to expand his architectural designs2. Digital has opened Anderson’s style to a contrast with analogue forms. This contrast is already present in Alien vs. Predator, where computer-generated imagery extends the possibilities of suits and miniatures. However, the complete upshot of digital power would come to life later, when everything can be extended with the new technology. Artificiality does not simply become the new organic. Anderson preserves the organic through its changes via the artificial, in a dialectical interplay reminiscent of Hegel’s sublation. In Resident Evil: Retribution, Alice is a human-created clone that discovers the instinct of motherhood by caring for a manufactured daughter. Worlds do not collide: it is necessary to comprehend them in their unity with their mutual relationship.

In placing life and death at the centre of the interaction between natural and artificial, Anderson has been revealing a humanitarian philosophy underpinning the entire span of his career. In this regard, Pompeii is his most poetic accomplishment. A profoundly personal project, Pompeii is a narration of lives divided by social conflicts and clashes of powers eventually obliterated by death, the greatest equalizer. Since the tragedy of the city of Pompeii is well-known, the eruption of Mount Vesuvius is cathartic only insofar as it liberates everybody from their personal struggles. Anderson again stretches and maintains the contradiction until its unity is revealed, only this time the two opposites are absolute dissolution and relative preservation instead of analogue vis-a-vis digital. The ending of Pompeii is precisely this difference removed. Life as a romance is no more, death as the unassailable destroyer is no more. Romance and thus life carry on after death, as temporary as they are never-ending.