I am always conflicted when it comes to Japanese animation. Talents such as Hideaki Anno and Satoshi Kon are absolute masters to me, but I’ve never really gone beyond the most popular names. My knowledge is limited because I want it to be limited. It sounds like a silly paradox, but it’s true. As much as I love works like Neon Genesis Evangelion and Paprika, I stop at the entrance and somehow refuse to understand the immense universe that Japanese animation is. 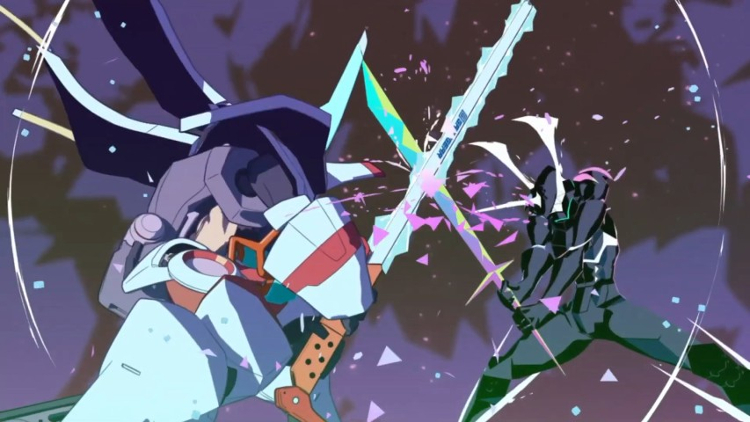 Sometimes, though, a new name manages to break through my nonsensical walls. In 2010 I met Hiroyuki Imaishi’s Dead Leaves and immediately fell in love with it. Its fifty minutes of pumping music and characters screaming their way through deranged mayhem are the complete opposite of what makes Neon Genesis Evangelion so special, and maybe just for this reason alone, what makes Imaishi’s madness so irresistible.

Since I heard the first words about Promare expectations have been mounting up, despite the fact that everything Imaishi did in between Dead Leaves and Promare is of moderate interest to me. His worlds live through action and movement, and when he stops and lets something else on the front his power on me decreases (e.g., Gurren Lagann). Even when he sustains the fury of Dead Leaves, as it often happens in the series Panty & Stocking with Garterbelt, he is actually stretching a technique that gains much of its strength from the short timespan it was deployed in.

Promare starts with a quick, precise prologue before almost twenty minutes of Imaishi showing how much he has learned throughout the years. The relentless action explodes with details and pastel colours, testing the viewer’s willingness to keep up with chaos. One can see where Imaishi is coming from, because he seems to sum up his career, but at the same time he is introducing a renovated style. He builds a world out of polygons and angles, which eventually will prove to be animation tools as much as elemental parts of a universe plagued by their rigidity. Their precision comes at a cost, but it’s not until the very end that we learn what is at stake here. Amidst the bedlam, characterization begins to take place, and the specific traits of each character emerge through movements and reactions to events impossible to control.

Along with the protagonists, a plethora of themes rise up to the surface. Although Imaishi doesn’t seem to be interested in exploring them in depth, Promare hints at least at fascism, racism, human experimentation, and technocratic failures. It’s not easy to understand the social and political implications of the issues on display, because the film deliberately chooses chaos before words, but Promare’s world still boils with details. There is also room for irony and sarcasm. Imaishi points his fun gun against Japanese pop culture, in a mix of self-referential pose and funny remarks, like Galo Thymos’ insisting on announcing himself before moving to action or applying awkward labels to machinery and fight stances. However, the dark cynicism of Dead Leaves and its twisted taste for the obscene are long gone, probably a sign of the kind of public Imaishi is aiming for this time.

The epic scale of the action sequences makes up for what Promare lacks in sex and degradation. Furious flames in the form of a dragon blast through the city in a feast of lights, while gigantic robots wreck havoc among skyscrapers, picking up where Gurren Lagann stopped. Imaishi pushes the boundaries of his animated sense of wonder, intersecting different animation techniques to render new possibilities on the screen. Imagination runs wild in every minute of Promare, which is what I expect animation to always do anyway. Imaishi knows there is no point in limiting oneself where the means at one’s disposal allow everything the mind conceives. The sky is not the limit. The sky is way below us now.