Listing my favourite films of this closing decade would be a daunting task, because I have only recently started to log my viewings. What I can do, though, is picking one of them, the one which stands out not as the most revolutionary of the lot, but as the best example of what film-making is all about for me. And that would be Todd Haynes’ Carol. 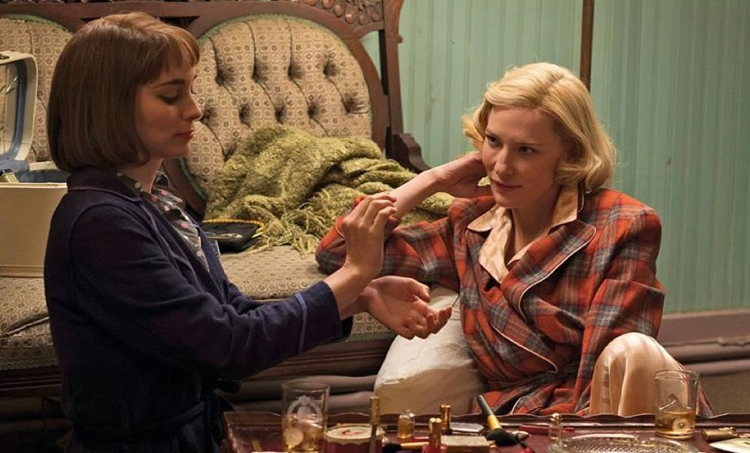 Carol is seemingly simpler than other relevant candidates to my number one spot on the best of the 2010s list. It is not a culmination of stylistic explorations like Michael Mann’s Blackhat or Jia Zhangke’s Mountains May Depart. It is not a new way of narrating the social disaster we live in like Harmony Korine’s Spring Breakers, nor another push to the cinematic form like Jean-Luc Godard’s Film Socialisme. The closest work I can think of is Baz Luhrmann’s The Great Gatsby, because both films understand the pages of the books they come from without compromising what cinema means to their respective auteurs.

Carol begins with a man interrupting a conversation between two women, Carol Aird and Therese Belivet. The women are sitting at a table, apparently having a casual conversation. By the end of the film we will have understood the weight of this exchange, but for now we can only register the effect of the man forcibly imposing his presence. Carol is visibly annoyed, she is trying to keep her cool before leaving the table and the scene. Only later will we know the turmoil behind the façade. Therese is embarrassed, in her eyes the reflection of the fight within her because she realizes, and it will happen again, that she has no control over the situation. This is just the first of many instances where women’s intimate space is invaded by men. Repeatedly over the course of Carol and Therese’s story, they face male gaze and male ire, men trying to make them reason according to male logic. With the exception of Harge Aird, Haynes does not show us how low men can get when they fail to take a relationship between two women into consideration. The male characters cannot accept a thing such as two women in love, and Haynes makes no effort to explore the dark side of more than one man. One is enough for him. Considering some of the comments I hear in my everyday life on gender-related topics, Haynes has all the reasons to be cynical.

However, this is a cynicism that does not need to be shouted at the viewer. Most of Carol takes place between silent reactions. Therese acknowledges the world around her with feeble tilts of her head, slight changes on her face, hardly using words to express what she feels. Her personality seems contained in her gestures. Haynes does not seem interested in a silent film performance, though. He is simply trying to make sense of a world where love has to be feared and needs to be hidden away. It’s a world of little words spoken freely. Even Carol, with her strong personality and her commanding wisdom, does not really know what to say to Therese much of the time if not through her body. Maybe she is afraid to lose her, but she also knows the consequences of her desire. The two women do not perceive their relationship as something inherently wrong, because there is nothing wrong with love, but at the same time everyone blames them for what they are doing. Love is there from the beginning, but Therese battles to accept it, because the conventions of imposed masculinity are always in her way. Carol and Therese want, but they cannot. They only can if they abandon everything and live among themselves.

Carol explores the discovery of love and the progress of the relationship through senses. The viewer feels the surfaces as if touching them, not because the sound design is great, which it is by the way, but because the grace of the characters’ movements is matched by the delicacy of the camera capturing them. The gentleness of a photograph, the softness of a sweater, the coldness of a gun: objects are alive without getting in the way. And yet Haynes avoids the objectification of commodities. In spite of the evident comfort in Carol’s life and the modest state of Therese’s one, Carol offers few glimpses of this difference, because it is irrelevant when it comes to what the women’s hearts crave for. When on the road, their love deepens unhindered by how cheap or expensive the room they are in is. As long as men are not around, the issue is not where or how.

Sight is another important and richly covered sense. Carol lives thanks to eyes and looks. The first lunch Carol and Therese have together is all about how they perceive each other and how this perception informs them. There is already passion underneath those looks, but it’s more of a systematic and yet gentle search for a possible kindred spirit. Is it there? Am I reaching out for something real? Carol’s and Therese’s eyes tentatively inspect what is in front of them, telling more about the affection they are trying to conceal than the mind would want to reveal. On the other hand, men look down on women as if to constantly remind them of their social position. Men’s eyes are angry and disparaging, but they are at their worst when they become condescending, manipulating sympathy to remind the women who is in charge after all.

In posing love as the central node of a web of questions and answers, Carol refuses to make sense of the connection it creates between two people and prefers to live it open. And rightly so. Love is the reason we unreasonably fall for someone, and it’s not often that a film can capture so well the poor chances we have to explain what is happening to us. The more I look at Carol, the more it seems like the peak of Todd Haynes’ career, something he is going to come to terms with for the rest of his life.