Without going too deep into Aristotle’s Physics, the Greek term kinesis can be translated as both change and movement. It’s a fascinating word, because it implies that every transformation is in fact a motion. It’s also a concept which popped up in my mind over and over again as I was sitting through Baz Luhrmann’s Moulin Rouge! for the first time. 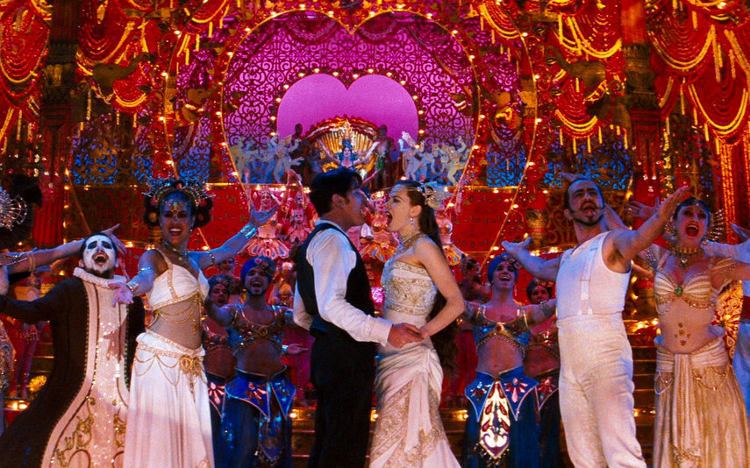 Much like Romeo + Juliet, Moulin Rouge! starts with a sheer attack on the viewer’s senses. It took me a while to get accustomed to Luhrmann machine-gunning frames. The pacing is hysterical with multiple characters constantly overlapping each other, unable to stop moving and talking, surrounded by music and colours aimed at obliterating the smallest hint of finesse. The screen struggles to contain the barrage of action and words, and even the editing department feels exhausted while it desperately tries to save up energy for the next sequence of events. It’s impossible to follow all that is happening in front of us and making sense of it in one go. The film demands other viewings to be fully appreciated.

This is an approach that can lead the untrained eye to fatigue, because it takes solid skills to master such an emotional assault to the mind. Play it too loud, and you will not fit in the viewers’ attention span; instead you will contribute to its progressive erosion. On the other hand, work on the safe side and you will miss the potential of your images’ energy, leaving the script or the actors in charge of avoiding a lacklustre effort.

Luhrmann, however, understands the limits of his mise-en-scène and knows exactly when he is about to stretch it too far. He stops at the right time, takes a step back, and lets everything in between movements speak. The control is all the more remarkable considering the places where the events occur. They are all confined spaces which shorten the distance between people, hastening their encounters almost as quickly as it would take an editing cut to do the identical thing. The viewer is unnaturally constrained, but at the same time they gain a deep level of intimacy with the characters even amidst the restless chaos.

Moulin Rouge! seems to agree with Aristotle about time. According to the great philosopher, time is a measure of change, hence time itself cannot exist without it. In Moulin Rouge! the illusion and the lavish artifice of the spectacle are the stopwatches bound to end their run as soon as the characters give up changing. If they hid their passion, they would never be happy; but if they unmasked their lies, they would put an end to a show that must go on in spite of everyone’s fate. Thus their relationship lives both in the dark and in the open, kept alive by a vibrant tension between the two worlds.

The tension is between Luhrmann’s world and cinema as a spectacle as well. Not only the director breaks the illusion of a period drama as soon as the pop songs blend starts, he also plays with the musical form interspersing quotes and homages along the way, asking us to be permanently up to speed. Moreover, he wants over-the-top reactions from his leads, who exaggerate their performances and get close to unnatural acting, albeit never quite there. We are left in between credulous and incredulous feelings, always on the verge of losing our mind right before we find faith in the images again.

Almost twenty years later, Moulin Rouge! is still an unidentifiable object from the outer world. Films like Speed Racer played with kinesis and cinema’s own artifice to wonderful results, but ever since Luhrmann’s pop extravaganza nobody has been able to master the essence of kinesis with such lush awkwardness.