M. Night Shyamalan is a peculiar subject in contemporary cinema. He helms his films most of the times, controlling writing, direction, and production, while often relying on the help of recurring collaborators. He devised his own recognizable style, and he has been showing interests in different genres with developing fascination for the psychological and the spiritual.

Interestingly, Shyamalan’s career is one of highs and lows. The box office has usually proved the director right on his path, but popular criticism seems to think otherwise1. Most of his efforts, especially the ones where he tries to approach new material (e.g., The Happening and After Earth), have been panned by critics. 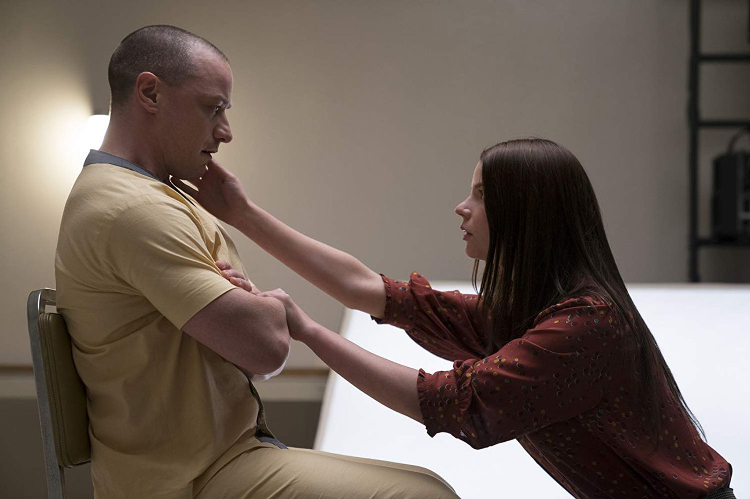 Glass is the third chapter of Shyamalan’s Unbreakable trilogy, and arguably the most complex in terms of narrative, style, and themes explored. It’s here that Shyamalan unravels the ties between David Dunn, Kevin Wendell Crumb, and Elijah Price, but Glass is not content in offering a quick solution to the enigma that started twenty years ago. On the contrary, Shyamalan uses the platform of his own creation to subvert the superheroes cinematic universe. It does so not by pointing out the failures of other films, but by showing the way to an alternative kind of writing and directing.

One has to look no further than the beginning to appreciate Shyamalan’s effort to find something new. The Overseer (Dunn) and The Beast (Crumb), the hero of Unbreakable and the villain of Split respectively, meet and fight each other without the time to process the fact that Shyamalan is deliberately avoiding the setup for an epic, final battle between good and evil. And if this isn’t enough, he ends the fight abruptly and shuts his heroes in a mental institution for the rest of Glass, opting for a slow investigation of their psyche instead of abandoning them to a relentless action feast.

Glass is roughly divided into three acts. The first ends with the aforementioned capturing of Dunn and Crumb, the second ends with Mr. Glass ingeniously setting himself, Crumb, and Dunn free, and the third is the final confrontation.

The first act seems to be only a prologue, and apparently it doesn’t offer the psychological nuances of the second one and the twists of the third, but it’s not so simple. Joseph Dunn, David’s son, has become a grown-up and yet he is still profoundly attached to his father, one co-dependent on the other. The death of Audrey Dunn removed the figure of the mother and the wife from the family, and despite being only hinted at the consequences on the relationship between David and Joseph cannot be underestimated. The bond is stronger because they only have each other to rely upon, but it also lacks the feminine rationality that could help ground imagination and dreams of virile justice. Then we have Casey Cooke, the only survivor of the collective sacrifice Kevin Crumb and his personalities were devising for The Beast in Split. The trauma of abuse in her private life reflects the history of abuses that has altered Crumb’s mind, and the powerful linkage between the two that ended up saving Cooke before turns out to be unbreakable in spite of the horror she has witnessed. As in the case of Audrey’s death, Shyamalan only hints at Cooke’s attachment to Crumb, but again it will prove pivotal.

Glass engages the viewer in a long, overtly critical, deconstruction of myth and belief. Albeit a subterfuge for a bigger plan, the second act is a constant push to hold one’s true nature back. Psychiatry is used as a means to suppress inner abilities, because the possibility of something so out of the ordinary is inconceivable much like an extraordinary truth. By subjugating her patients Dr. Ellie Staple is exercising control over unnatural forces, hence playing the role of God that science frequently allows humans to enact. Shyamalan turns this critical observation against us, making both the doctor and the protagonists look at the camera in medium and medium close-up shots. The point of view keeps shifting between observers and observed, analyst and patient, hunter and prey, complicating relations and sympathies by juxtaposing good and evil without clear distinctions. This circularity is mirrored in the acts of coercion we see: superheroes are forced to be humans, humans are pressured to be superheroes, victims are manipulated to confuse other victims. The freedom of choice is mined by reasonable doubt until the urge to control reveals itself as the supreme power in the third act.

The third act is where all the pieces come together. It’s a showdown, but as deceitful as anything the trilogy has showed us so far. We understand what Mr. Glass had in mind, but more importantly we realise that heroes and villains are one and the same. Shyamalan reflects on the privacy deprivation of our technology-aided age and on the abilities in terms of communication it grants. Eventually, technology proves to be both fatal and a chance of hope, a man-made super power capable of multiplying the eyes of the oppressor and the mouths of the rebels at the same time. Technology is the tool that makes connectivity possible. Through connections we can overcome our inner barriers, find each other, and consequently ourselves.