I remember quite vividly how I ditched Harmony Korine’s Spring Breakers at the 69th Venice International Film Festival. My job was writing a reportage on the Asian films selection, but that’s a poor excuse for my behaviour, because I could have easily organised my schedule to catch it. But I didn’t trust the “enfant terrible” label thrown around whenever the name Harmony Korine came up, and I wasn’t particular interested in Disney starlets. The fuss was too much for me, and instead of titillating my curiosity, it made me look away.

Years passed, times a-changed. Last month, I found the Blu-ray of Spring Breakers at a cheap price, and I remembered how much I had been learning from my cinephile mistakes in the last couple of years. I bought it, convinced that I was now ready for whatever Harmony Korine had planned for me. I stood corrected. 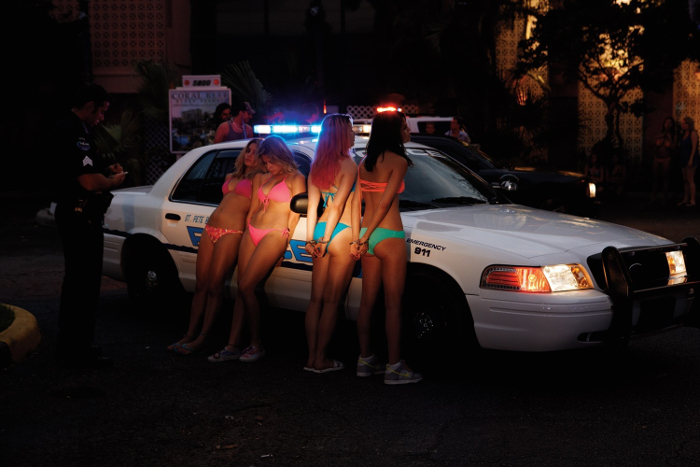 There are two separate occasions where Harmony Korine defines himself as a “soldier of cinema”. One is in the Spring Breakers making-of1, and the other at the film Q&A in London on April 20132. It’s an interesting choice of words, because it takes the bravery of a soldier to never give up one’s own idea of cinema. It also implies a broader battle with an industry that favours conformism in place of experimentation, a war with a machine that eats talents and spews standards. Finally, it casts a bold light on Spring Breakers and Korine’s career.

Since his days as a scriptwriter for Larry Clark’s Kids, Korine has been particularly fascinated by characters unable to cope with the world around them. Outcasts, misfits, marginalized teenagers. His favourite films3 are telling of his background and what he looks for in cinema: the cracks in the society around him. However, truth doesn’t interest him. He favours a style which relies heavily on improvisation and gut-feeling, and which indulges in spur-of-the-moment events instead of linear narrative. He doesn’t shy away from intimacy, but it’s not for voyeuristic pleasure. Intimacy is linked both with tenderness and suffering, and he’s at his highest when he strikes the balance between the two.

This is a balance he had been looking for up until Spring Breakers. He leaned on the suffering side in Gummo and julien donkey-boy, and he exploited tenderness maybe a bit too much on Mister Lonely. The anarchy of Trash Humpers covers the suffering with mayhem, but the pain is still there albeit in deviant form. It’s only with Spring Breakers that the pieces he had been collecting for twenty years4 finally fit together5.

These pieces come from everywhere and relate to anything: exposed and manipulated beauty reminds me of the bodily provocations of Paul Verhoeven’s Showgirls; Disney stars and specific Britney Spears references bring back the pop-cynic time-machine of Joseph Kahn’s Detention; drug abuse comes from the social punches of Alan Clarke’s filmography; bigger-than-you lives on the edge embrace the abstract hedonism of Francis Ford Coppola’s Rumble Fish; the relation between Alien and the girls summons the dangerously vibrant affair of Bernardo Bertolucci’s La Luna; and the much desired escapade is just like the impossible dream of Robert Altman’s Brewster McCloud. With compassionate love, Korine clashes his influences altogether, mashes them up, and finds the peculiarity of his voice.

Nonetheless, Korine doesn’t stop at savvy nods and nerdy winks. Actually, he is not interested in pushing quotations down the viewer’s throat, because, by his own admission, he is not a video brat6. The difference between Harmony Korine and Quentin Tarantino, or between Harmony Korine and Kevin Smith, is that the cultural context plays both a relevant and an irrelevant part. In 2012 everything from popular culture that inhabits Spring Breakers was fashionably around us. Korine picked the trend-setters of the time and had fun with them. He did not, however, insert the film into a precise time-capsule. For instance, Clerks cannot be looked at without thinking of the 90s. In this respect, Korine reaches out for the timelessness of Michael Mann or Terrence Malick. He is in the present just as much as he is in the future. Watch Spring Breakers now for the first time and you may loose the relevance of the celebrity discourse, but you sure won’t miss the degeneration of disillusioned youth.

Part of what makes Harmony Korine one of the most relevant American directors today is his unwillingness to compromise. He seems determined to pursue his fantasies without receding once, facing both praises and critiques with eyes that are already thinking about the next step. Or maybe not. Maybe he is just enjoying the ride and not really thinking about it at all.