When I was a kid, my grandfather was always watching westerns and war films. I remember fondly the day when he asked for my VHS of Saving Private Ryan, because it was a bit of a laugh. He took the VHS, went back downstairs, and put it on as loudly as possible. The house turned into Omaha Beach.

We used to disagree on our favourite war film. The Longest Day was his number one, while Full Metal Jacket was mine. He couldn’t stand Full Metal Jacket, and he never did come to appreciate Apocalypse Now which, as soon as I discovered it, replaced Kubrick’s work in my heart. 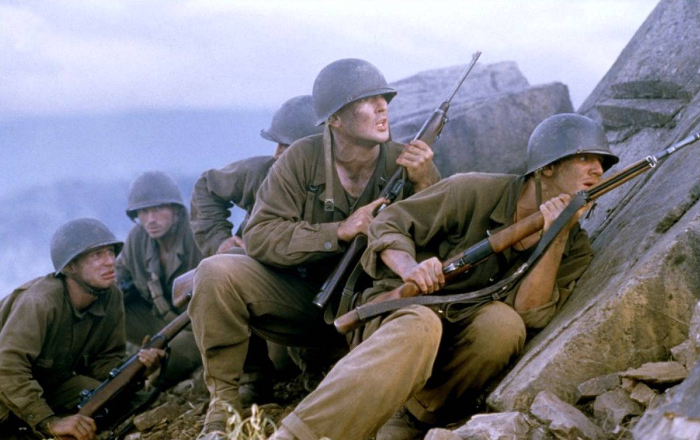 I don’t know now if my grandfather has ever watched Terrence Malick’s The Thin Red Line, but we would probably disagree about it too. Well, now anyway, because when Malick’s come back occurred, I was still under the spell of Saving Private Ryan. Young and naive, I didn’t even notice The Thin Red Line, and when I approached it for the first time, Saving Private Ryan was already gone for good from my mind and Francis Ford Coppola’s Vietnam was my new religion.

Predictably, The Thin Red Line didn’t click at all for me. I didn’t understand what Malick was trying to say about the war, nor the reason behind his method. It didn’t help knowing nothing about his previous two films, and it didn’t help entering The Thin Red Line looking for Apocalypse Now. So long, Terry, said the slightly less naive than before—but still very much without a clue—cinephile. Since then, I have skipped his new releases dumbly grinning every time, so convinced that he was not and never could be a part of my idea of cinema. Once again, I was wrong.

I always go back to the holes in my cinephilia, especially on the ones I created on purpose. Last December, I finally came to appreciate Malick thanks to The New World. It wasn’t enough, though, so recently for a couple of weeks I have immersed myself in his cinema. Starting from Song to Song, because I had to start somewhere, I spent those nights and many days after thinking and dreaming about Malick’s images and themes. The Thin Red Line came out on a totally different light, but, to my utter surprise, Apocalypse Now came out on a different light too.

As pointed out in a beautiful discussion on The Thin Red Line, there is an issue of “othering” which is rarely taken into account when works of art are discussed. That is to say, I’ve never encountered it before in the film criticism I regularly read.

“Othering” is a term that not only encompasses the many expressions of prejudice on the basis of group identities, but we argue that it provides a clarifying frame that reveals a set of common processes and conditions that propagate group-based inequality and marginality.1

Seen through the lenses of othering, Apocalypse Now shows its cracks. The film focuses its and our eye on Captain Willard and his quest for Colonel Kurtz, therefore deliberately ignoring the essential component of the conflict: the Vietnamese people. Relegated to mere background of the main events, they are always seen from the point of view of the US soldiers. Marginalized both physically and psychologically, they have no voice. We are left with how they are perceived instead of how they really are. The inequalities are hidden away, and there is no question of identity because there is no identity to question.

The Thin Red Line begins operating on almost the same level. The monologues reveal the inner fights of the soldiers, the voice-overs claim our attention on the words before the images. The long, intense battle sequence mainly concerns the US soldiers’ perspective. It’s not until the C-for-Charlie Company conquers the Japanese bunkers that we see the enemies faces and understand their sense of the events. This is where the film starts flipping the position of the spectator. From our privileged position as viewers, we see what’s on the other side of the battle. We see human beings as desperate as the C-for-Charlie Company members, torn down by fatigue and absolutely unable to cope with everything around them in a rational way. Whatever the cause of the war, it’s irrelevant by now.

The effect is somehow even more devastating due to Malick’s choice of rendering these sorrowful moments in complete silence. Aside from the ever-present music, the carefully chosen sounds, and the bits of voice-over punctuating the scenes, we are left with our own devices in front of a horror that is universal, and not confined to the mind of a single character. We are shown an attachment to life and a belief in a greater hope that few other war films grant to the enemy. Gratuitous acts of violence then become not a display of power, but the only way to erase the guilt and the wounds. Even the teeth taken as souvenirs from the victims turn out to be a pointless reminder and have to be thrown away to remove the memory.

The Thin Red Line, like every other film by Terrence Malick, is much more complex than this, and cannot be easily reduced to a statement for othering. However, by exploring the effects of the war on everyone involved, Malick annuls the egocentric view of the heroes and puts forth the inhumanity in all its compelling nightmares.