It’s always been hard for me to cope with Italian cinema. I am not talking about obvious masters such as Roberto Rossellini, Elio Petri, and Federico Fellini here. I am talking about the most recent output of my country’s film world, which makes me wonder what those masters would think of Italian cinema today. 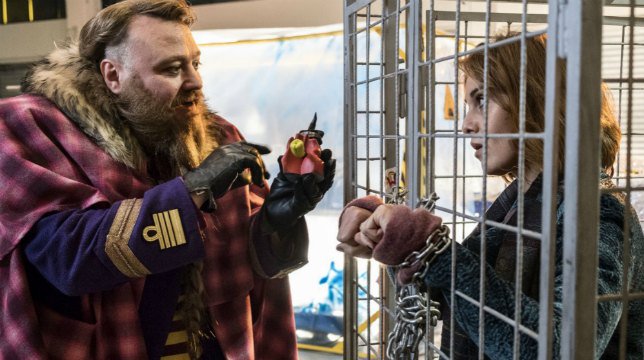 Luckily enough, there are exceptions to my bias. Michele Soavi’s Arrivederci Amore, Ciao is one of them, although it’s a work so criminally underrated it feels like me being the contrarian again. No wonder, then, that last night I had mild expectations for Soavi’s latest effort: La Befana Vien di Notte. The trailer looked like fun, and I entered the theatre expecting an enjoyable adventure to start the new year with a smile on my face.

Sadly it all started to go bad after a few minutes in. All the jokes that matter are in the trailer, and everybody around me must have seen it too because nobody was laughing. This not only shows how poor the jokes are, but it strategically conceals the overall awful acting, to my mind some of the worst ever seen in an Italian film. Lines mechanically delivered, no rhythm nor traces of passion whatsoever. As it generally happens with Italian dubbing, there are exclamations no one uses in real life (“Chi diavolo sei?”) and needless abundance of pronouns (something fine in English but redundant in Italian). Are decades of dubbed US films to blame for this? Who knows.

The trailer hides the atrocious action too. There is a sequence, way too long, with the kids running around visibly not scared of the ridiculous drones shooting at them. Maybe Soavi told everyone “run, scream, just do something for a while” and then went to grab a bite. No other explanation off the top of my head.

These are all marginal details compared to a script with no memorable characters and incapable of building the sense of wonder necessary for an adventure based on folklore. Paola, the Befana of the title, would fit well in one of the latest seasons of Doctor Who, since she is nothing more than a tool to move the plot forward. Cortellesi, the only one in the cast with a hint of talent, strolls along with the aplomb of a tired actress, a genuine “it’s just a job anyway” echo in her voice.

The kids are insufferable, an accretion of stereotype upon stereotype which probably wished to remind us of the Goonies lot but fails miserably at doing so. They don’t work as a group of friends, there is nothing playful about them, because there is no connection between them. They are random people thrown on the set and left there to the best of their capabilities. I don’t know why Soavi felt the need to show us the bully as a pervert spying on naked women in all this, but hey, let’s shock the audience with something wild.

Kind of pointless, though, because the shock comes as soon as the villain enters the scene. A character so ill-conceived and ill-portrayed it shows a complete disregard for the history of villains and the viewer’s patience. He tries so hard to be the bad guy you want to laugh at that he ends up insulting your intelligence with a dull mockery of the idea of evil. Not for a second I suspended my disbelief watching him menacing our heroine and planning to conquer the heart of the children. The supreme failure of La Befana Vien di Notte.

I don’t think I was prepared for a Soavi’s like this. True, I wasn’t expecting another Arrivederci Amore, Ciao either, but a flop such as this hurts more.