Much as any cinephile out there, I have my ugly share of preconceptions. I try to hide them most of the times, but describing my approach to cinema as immaculate would be flat-out lying. For instance, it takes a good number of trustworthy reviews to get me to watch a Sundance Film Festival winner. Possibly worse, it’s nearly impossible to convince me to sit and enjoy the latest hyped TV series. 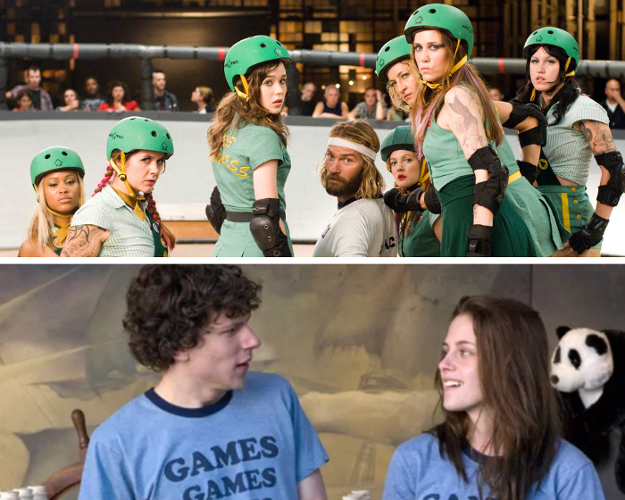 A similar bias has kept me away from Drew Barrymore’s Whip It for a long time. Without even giving Barrymore a chance, I skipped her directorial debut in 2009 with a smug glow of irony on my face, and forgot about it until recently. Not being a particular fan of Barrymore’s acting career, I thought Whip It would be a far less than spectacular work. Gladly, it turns out I’d better overcome my stupid ideas soon, and let cinema speak for itself.

Whip It is the story of the hopes and chances of Bliss Cavendar, a teenage girl feeling out of place and out of time. Since I know the feeling very well, this is immediately relatable, so it’s easy for Whip It to pull me in and never let me go. I chose cinema and computing to deal with reality in my younger days, but since Bliss is braver and smarter than me, she opts for sport and teamwork instead.

I can relate to Bliss just by looking at her marvelling when she first sees some girls skate-rolling their way to a shop counter. Barrymore captures on Ellen Page the exact feeling of wonder that conquered me when I coded simple animations in Turbo Pascal back in secondary school. Right there with you, Bliss.

This is where Whip It really shines. Not in the conventional, albeit lovable plot. Not in the furious matches, although the way Barrymore handles the tension and especially the failures is really captivating. Whip It does its best pretty much in the same field Greg Mottola’s Adventureland, the other great coming of age of 2009, does. Both films, in wonderfully different ways, explore what it means to become adult and independent. By means of sport passion and romance respectively, Barrymore and Mottola use a light dose of humour to place the heavy burden of adulthood on their protagonists’ shoulders.

Mottola’s James Brennan is too young to be adult, and too adult to be young. Socially inept, James finds a role model in Mike Connell, the park maintenance man that everyone loves. He looks up to him, opens up to him, and keeps admiring him even after the pretty mask starts showing its cracks. The failure of Connell’s macho act is vital to James’ experience. He is now confronted with one of the many bad faces of a grown-up, and eventually he resorts to be as different as possible from it. Mottola works the virile bonding between James and Connell with subtlety, infusing tenderness to the very end. The last time James looks at Connell flirting with a bunch of girls, his eyes reveal everything we need to know about his opinion of his role model. James knows who he will not want to be, now.

Bliss has her own role models too, but she is apparently the only one regarding them with admiration. It’s interesting to notice that the Hurl Scouts act tough to hide something in their life, much as Connell does in Adventureland. Also, the Hurl Scouts are misfits, and they become popular only on the roller derby track, something similar to Connell’s popularity within the boundaries of the park. Both the Hurl Scouts and Connell are older than our protagonists, but not as older as their parents. This is crucial, because the Hurl Scouts and Connell represent an ageing step closer to Bliss’ and James’ age, which means they can see what life is going to hand them in the next few years if they follow their models much too close.

Whereas the relation between James and Connell always shows an intangible distance, Bliss fits naturally among the skate-rollers. This probably tells more about teamwork than of the strengths of Bliss’ and James’ social skills, but there is an alpha male component in James and Connell which plagues their way to Emily Lewin’s heart and keeps them hopelessly apart. The Hurl Scouts share a passion that can be as brutal and painful physically as love hurts psychologically, and yet agonistic competition never poses a threat to their friendship. Another valuable life lesson here: leave the pedestal if you want honesty from the people around you.

In the end, Bliss convinces her parents of the sincerity of her passion, and James finds his way to Emily. These happy endings conclude two incredibly formative experiences, and more importantly take some of our characters’ innocent youth away from them. They are not adult yet, but they had a glimpse of what it means to be one.