Unexpectedly, it took me more than usual to process Oliver Stone’s Snowden. It is not a convoluted film nor its craft stroke me as the more rewarding JFK. It is its inexplicable usefulnessless that kept tormenting my brain days after the viewing. 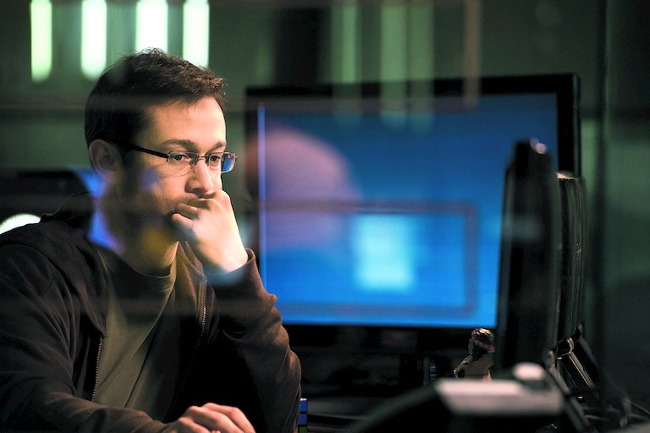 On various occasions, Edward Snowden referred to himself as being just a piece of the bigger picture, the least significant detail of an ongoing narrative. It is, and always has been, the bigger picture what we have to care about.

In this respect, Stone did surprisingly well. Snowden dodges the misleading trailer and carefully balances the man and the story. It delivers an on point drama not that much concerned with Edward Snowden’s private life. And for once, cinema treats computer culture with decency.

However, the same question I asked myself at the end of the film still resonates with me. Put it bluntly: what is the point of Snowden?

The vital importance of Edward Snowden’s actions should never be underestimated, nonetheless Laura Poitras’s outstanding Citizenfour is out there for everyone to watch and learn from. Edward Snowden himself is streaming talks and interviews from Russia regularly and looks alive and well on Twitter. Following the consequences of his disclosures is just a click away. This easily rules out my first thought: Stone is not aiming to spread the message, unless he thinks awfully low of his viewers.

Snowden fictionalizes many scenes from Citizenfour, staying as close as possible to the source material. Together these scenes turn out to be a fictional documentary that relies heavily upon an actual documentary, resulting in a trite exercise of style. It might serves the narration well, but it runs the risk of hiding the real work from the ones who have not seen it yet.

Then again, if Citizenfour already tells it the way it has to be told, what was Stone hoping to achieve? Of all the things we could have done after watching Snowden, speculating about its objective is the most trivial one.