Anthony Oliver Scott – A. O. Scott as it is spelled on his Better Living Through Criticism – wrote a book that on almost every page seems to be pointing its finger at me. Incredibly, more often than not Better Living Through Criticism aims precisely at my cultural background, filling all the gaps my IT curriculum has left me with when I approach cinema and film criticism. 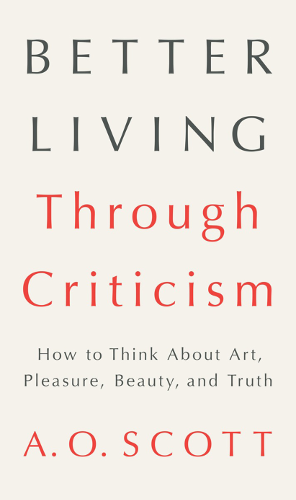 This is quite obvious from the very first pages. Scott opens quoting the same Oscar Wilde’s words that more than 15 years ago pushed me to go beyond simple matters of “taste”. I cannot think of a better call to arms, and from there on I devoured the book in a couple of days.

Which is probably the wrong thing to do, especially if you – just as myself – know little about the history of arts and criticism. However, I can easily justify my rush. Scott has the rare ability to guide you through centuries of knowledge with the delicacy of an intimate friend. He appears to understand why you are trembling in front of the vast ocean of culture he is about to unveil. So he chooses his words carefully, delivering his thoughts at a quiet, reasonable pace for you not to get lost.

Furthermore, Scott manages to be always on your side. I must admit I was partly put off by the title. Better living through criticism, seriously? Are you going to tell me what to do with my mind just because you think you can? If I had not read Scott’s film reviews before, yes, I might not have been here today writing my comments on his work. But I did read his film reviews, and I still do. I do not agree with him sometimes, but – as he explains – this is the difference between a casual critic and a great critic. Scott has his own voice, and all its idiosyncrasies are what make me go back to his writings again and again.

Better Living Through Criticism traces the path from art to criticism and from criticism to art. This back and forth relationship drives consensus and objections, argument and coffee break talks. Through the likes of Henry James, Samuel Johnson, Susan Sontag and Yvor Winters, Scott wanders in the land of the love and hate paradox that is criticism. There may be no end to his journey, albeit over and over an end of criticism has been declared and somehow hoped for.

Scott states that there is much demand for criticism today, even more than in the past. Our epoch of consumerism, digital abundance and readily available tools for crafting a piece of art has a desperate need for someone who can judge and value. Provided this someone cares about the object of her analysis, because lack of empathy is one of the most horrible sins a critic can commit.

There is some advice for the next critic-wannabe in this book, but more importantly there is a fresh and perceptive look at what is going on in the mind of the next person who lays her eyes on the latest work of art.